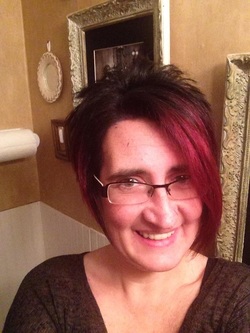 Mari has been writing as far back as she can remember. She spent most of her teen years writing short stories for her friends, it was a hobby for her even though she was published in the school newspaper.

She met and married her very own Alpha male 20 years ago and they have a 19 year old daughter, and two sons ages 16 and 15. They have 4 dogs and 2 cats. There is never a dull moment around the house. They live on the beautiful Gulf Coast of Alabama and are blessed to have a home on the river and to have the beach just 20 minutes away.​​

Over the years she wrote a few short stories in-between raising babies but it wasn't until 2012 she decided she needed to pursue her dream of writing a full novel. It took a while but in January of 2014 her debut novel was self-published. There is always a story in her head and characters talking to her. She enjoys being able to share her characters with others.​
WEBSITE | FACEBOOK | TWITTER | AMAZON
Stamp Out Prejudice Hatred & Intolerance Everywhere
Powered by